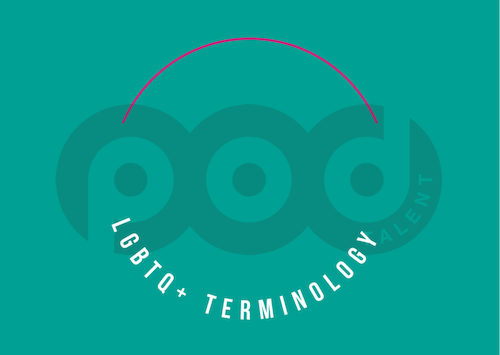 ​This June at Pod, we have been celebrating Pride Month together, and we have already hosted our book club (Call Me By Your Name) and held a Pride-themed event during our 10th birthday party.

In order to influence positive change around us during Pride Month, one of the most important things to do is to educate ourselves, especially if we do not personally identify as LGBTQ and want to be an Ally.

The term LGBTQ+ itself needs unpacking in order to be fully understood, and so we have written this article to make this knowledge easily accessible to everyone in our network.

Lesbian - Refers to a woman who has a romantic and/or sexual orientation towards women. Some non-binary people may also identify with this term.

Gay- Refers to a man who has a romantic and/or sexual orientation towards men. It can also be a generic term for lesbian and gay sexuality - some women define themselves as gay rather than lesbian. Some non-binary people may also identify with this term.

Bi - Bi is an umbrella term used to describe a romantic and/or sexual orientation towards more than one gender. Bi people may describe themselves using one or more of a wide variety of terms, including, but not limited to, bisexual, pan, queer, and some other non-monosexual and non-monoromantic identities.

Trans - An umbrella term to describe people whose gender is not the same as, or does not sit comfortably with, the sex they were assigned at birth. Trans people may describe themselves using one or more of a wide variety of terms, including (but not limited to) transgender, transsexual, gender-queer (GQ), gender-fluid, non-binary, gender-variant, crossdresser, genderless, agender, nongender, third gender, bi-gender, trans man, trans woman, trans masculine, trans feminine and neutrois.

Queer - Queer is a term used by those wanting to reject specific labels of romantic orientation, sexual orientation and/or gender identity. It can also be a way of rejecting the perceived norms of the LGBT community (racism, sizeism, ableism etc). Although some LGBT people view the word as a slur, it was reclaimed in the late 80s by the queer community who have embraced it.

Questioning- The process of exploring your own sexual orientation and/or gender identity.

For more information, we recommend visiting the Stonewall website. Here you can find a huge variety of advice, events, educational content, and statistics.